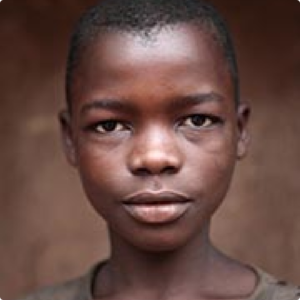 Mayoyo is an intelligent boy full of energy and potential. But when he was ten years old he got a wound on his leg that would not heal.

Desperate for a cure, Mayoyo’s father took him to see a witchdoctor. The medicine he prescribed did nothing, so they went to the health center where Mayoyo was finally diagnosed with leprosy.

But Mayoyo’s pain was just beginning. Afraid of the disease and what others would think, Mayoyo’s father chased him away from the family. In despair, he fled to an uncle’s house. His uncle sent for American Leprosy Missions’ Dr. Jacques Kongawi, who treated Mayoyo with Multi-Drug Therapy. Perhaps just as importantly, Dr. Kongawi convinced Mayoyo’s father to welcome him back.

Thank you for your partnership, which helped restore this precious child to his family.

Donate now to bring hope and healing to another child.