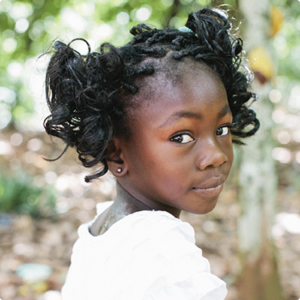 Seven-year-old Erica sits with her mother behind their house in Ghana, under the shade of the cocoa trees. Erica’s mother works in a cocoa plantation. Her father is a taxi driver and travels long distances.

About two years ago, a boil appeared on Erica’s shoulder. Her mother used some traditional remedies on it, but it didn’t help. The boil became bigger, and others started appearing. So her mother took her to a local hospital. But they couldn’t help either.

By this time Erica had boils on her back, chest and arms. A neighbor suggested they go to our partner hospital three hours away. Desperate, Erica and her mother made the long journey. 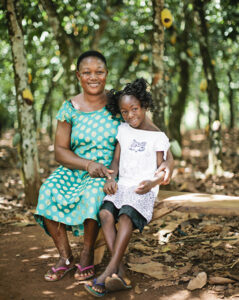 At the hospital, Erica was diagnosed with the flesh-eating disease Buruli ulcer and received two months of antibiotic injections. The wound on her shoulder started to heal and the other boils went away. As the wounds started to heal, Erica returned home, making regular trips to a local clinic for wound dressings. But the local clinic was still an hour’s motorcycle ride away. So your generosity provided Erica and her mother with money to make these important trips. Other Traumas Erica was healing physically, but there were other traumas. When the villagers realized that Erica had Buruli ulcer, they shunned her and her family. The villagers wouldn’t allow Erica to use the community water tap, and told the landlord to evict her family. People wouldn’t come around to visit like they did before. “Erica even stopped school for a year,” her mother says. “Her classmates teased her. Her teacher even didn’t want the other children to play with her.” 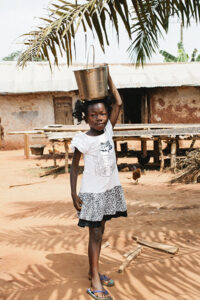 And the wound on Erica’s shoulder still hadn’t fully healed. Erica couldn’t lift her arm. But thanks to your compassionate support, Erica was able to have a skin graft on her shoulder.

Now Erica can lift her arm. She can help her mother and fetch water. Even better, now that the wound is gone, the villagers are no longer afraid. Erica has returned to school and doesn’t get teased anymore.

She says shyly, with a smile, that she’d like to be nurse when she grows up. Her mother smiles too. “I’m very grateful for all the support and assistance we’ve had. Thank you. You came to support us at the right time and people don’t stigmatize against us now.”