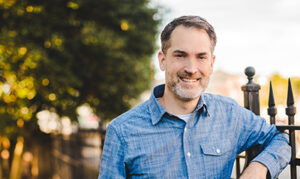 Having spent his teenage years in Democratic Republic of the Congo (then Zaire) with his missionary parents, Simmons developed a heart for those suffering from curable illnesses like leprosy and the societal persecution that often accompanies these types of diseases.

A global health leader highly respected for his strategic vision and collaboration, he has championed innovation in neglected tropical diseases including the launch of the NTD Innovation Prize and the AIM Initiative, which supports governments to map cases of NTDs, enabling more accurately targeted delivery of health services.

Simmons is chair of the Global Partnership for Zero Leprosy, a founding and executive member of the Leprosy Research Initiative, former vice president of the International Federation of Anti-Leprosy Associations (ILEP) board of directors and a former advisory board member for the Nippon Foundation’s funding of the WHO Global Leprosy Program.

Simmons has been featured in The New York Times, NonProfit PRO, Authority Magazine and the Leprosy Review. He holds a degree in political science from the University of Tennessee.