“I go to have talks in the community and do return visits where patients are treated to make sure they are doing their treatment,” Ms. Roberts told AIM program manager Tia Akpan. “This NTD (training) … is very important to human life because more people were neglected, people that I saw.” 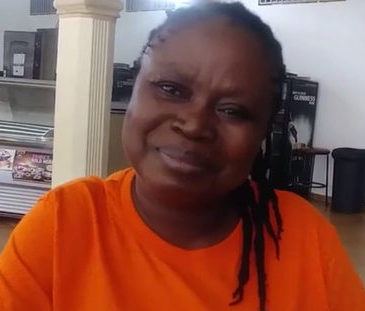 Prior to the start of the integrated CM-NTDs project in 2017, NTDs were not included in the list of priority diseases for community health workers to report, so they weren’t trained to identify persons affected by NTDs. Because of the disabilities and social stigma caused by many NTDs, persons affected rarely seek treatment without assistance. The integrated CM-NTD project provides comprehensive training to community health workers in five counties, equipping them to identify, refer, and follow up with persons affected as they manage disease.

Ms. Roberts sees the difference she makes when she visits the communities around Phebe Hospital:

“Before…when people get a sore they will be ashamed to talk about it. But when we brought the fliers…some people will be ashamed, but they see the fliers and right after that they follow me and say ‘What you showed on the fliers, I have some (similar symptoms). How do I get medication?’…I ask them how it started, I refer them, and if I refer them and they’re positive, there’s treatment. So the NTD Program is very good.”

These community health workers and volunteers have brought to light previously under-reported cases: in 2017, 202 new cases of Buruli ulcer were reported with 173 in the five pilot counties (compared to 101 in 2016), as well as 223 lymphatic filariasis lymphedema cases (compared to 10 in 2016). To date, 2,159 community health workers and volunteers have been trained, exponentially increasing Liberia’s health system capacity in just a few years and moving the NTD Program forward in previously unseen ways. By working closely with the MOH, American Leprosy Missions helps ensure that every person affected by NTDs has access to the health services they so desperately need.