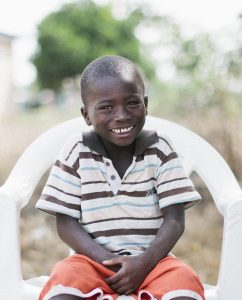 Just seven years old, Emmanuel is the eldest of three children. His father, Gilles, is a cocoa farmer in rural Côte d’Ivoire.

One day, Gilles noticed a small bump on Emmanuel’s leg. At first he didn’t know what it was. After two weeks, the bump was still there. Then Gilles remembered: In 2004, he had received treatment for a similar bump at our partner clinic.

So he rushed Emmanuel to the clinic, where he was diagnosed with Buruli ulcer. The same disease that Gilles had years ago.

Fortunately, a doctor at a local clinic told her about our partner hospital. When she finally arrived, Silve learned that she had leprosy. But thanks to your support, her leprosy was cured after six months of multi-drug therapy (MDT), a combination of three antibiotics.

Gilles says, “I knew that if it was Buruli ulcer, treatment would be free. The process has all been very easy and I’d like to thank the clinic staff. The nodule has practically gone now.”

Success! Thanks to you.

Because of your generous gifts, little Emmanuel received treatment quickly, before there were any disabilities or deformities.

In 2004, people like you provided the cure to Gilles.

And today, you cured his son Emmanuel.

Thank you for partnering with us to bring cure and care to people like Gilles and Emmanuel in Côte d’Ivoire.